RESILIENCE AND ECONOMIC GROWTH IN THE SAHEL – ENHANCED RESILIENCE (REGIS-ER) 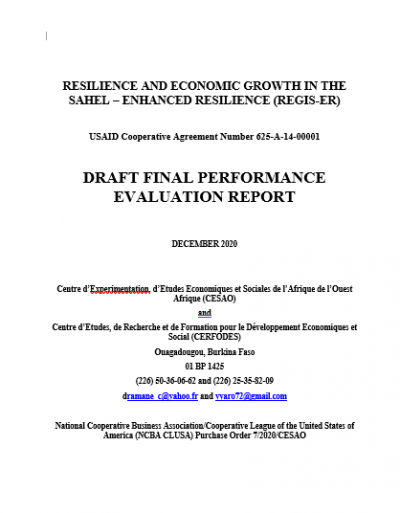 RESILIENCE AND ECONOMIC GROWTH IN THE SAHEL – ENHANCED RESILIENCE (REGIS-ER)

The undertaking of this final evaluation of the REGIS-ER project defied standard practices. The changing nature of this complex project over more than seven years and the vastness of its implementation areas, spread over two adjoining Sahelian countries, Burkina Faso and Niger, added greatly to the challenges faced by the evaluation team. The fact that there was not any solid baseline survey at the onset of the project in November 2013, and no evaluation of the project was

undertaken at its original five-year life span in 2018, complicated matters.

The timing of this four-month (July – November 2020) evaluation effort was also fraught with exceptional obstacles. Excessive rainfall prevented access to many of the project’s targeted villages and the threat of violent extremism were key obstacles to undertaking this evaluation at this time. Furthermore, the ongoing COVID-19 pandemic during the period added to the risks of undertaking an evaluation. Nonetheless, the evaluation team did its best to produce this report. In any event, the information provided herein should be useful to USAID and other assistance agencies in planning future activities in the Sahel and elsewhere.

The results of field surveying work and dozens of interviews with past and actual beneficiaries of REGIS-ER communicated that the project did have a favorable impact on its targeted populations in both countries. It is believed this impact could have been greater if the project had been able to maintain its focus on its initial 30 communes’ districts. However, security threats have progressively reduced the coverage of the project over the past couple of years and now it is only able to work in eight communes. This changing number of focus areas and the varied number of villages reached in each area by the project, as well as the variance in project interventions in each village, further complicated the conduct of this evaluation.

It is evident that a sizeable reduction in the project’s geographic coverage area greatly reduced its overall impact. While efforts were made to evaluate the project as originally designed, these efforts were frequently thwarted because the size and composition of the project today is different than the initial project that was started in late 2013. Evaluation team members would often ask themselves the following question: “Which project phase are we evaluating?”

According to the feedback received from the project beneficiaries in the project villages surveyed for this evaluation, the project activities found to be the most useful were (in order of priority) as follows: bio-reclamation of degraded soils, Habbanayé (livestock assets) , conservation and regeneration agriculture, and the family and market gardens. Beneficiaries also expressed a high appreciation of project efforts to improve their health and nutritional levels by implementing activities that improved their access to potable water and expanded the diversity of their diets. Many beneficiaries also expressed their appreciation of behavior change activities which led them to adopt healthier practices. Efforts to increase incomes through savings and credit activities were also appreciated, but they were constrained in some areas by local habits and beliefs.

The project’s efforts to increase the participation of women in the community decision-making process are laudable. In this regard, the project has eroded to a small degree traditional customs which have excluded women from involvement in the governing of their communities. Much more work is needed in this area of gender equity, but it appears the project may have started a progressive process of expanding the role of women at the community level.

In recent years, the project has increasingly focused on strengthening local governance. This effort is at the core of the project’s sustainability plan. The project has especially worked with selected commune governments to assist them with the elaboration of commune development plans that incorporate resiliency planning. This process of building the capacity of local governments to elaborate and implement competently their own development plans is essential to sustaining many of the project’s activities in the future. Unfortunately, only a few communes have the ability to generate the funding needed to draft and implement these plans.

More information on the convoluted trajectory of this seven-year project is provided in the following report. Added detail is also provided on the areas of the two countries where the implementation of this multi-sector project were concentrated. This evaluation’s purpose and main aims, and the questions it has endeavored to answer are stated, as well as the design of this evaluation and its methodology are described.

Many of the project’s interventions were not new and have been part of a number of past development assistance efforts. Currently, there appears to be a higher level of receptivity among targeted populations to adopt many of these interventions. It is uncertain why adoption levels are higher now than previously, but it is speculated that this may be due to growing population pressures which oblige people to change their traditional behaviors and practices and try something  new.

This evaluation exercise resulted in the following listing of a number of major lessons learned and key recommendations. 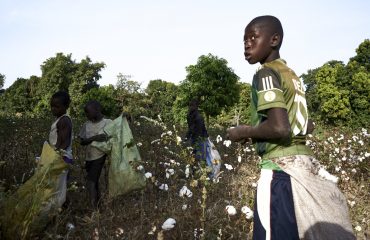 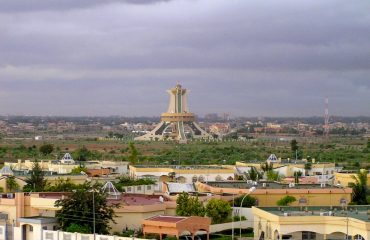